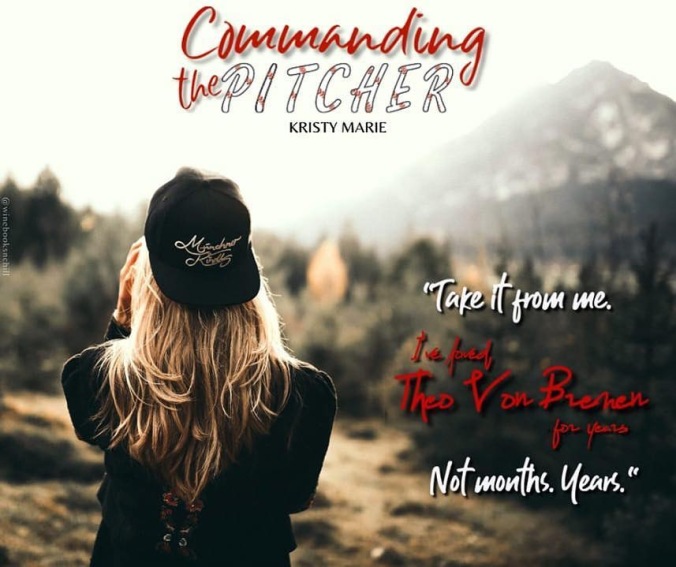 Are you excited for Commanding the Pitcher by my girl Kristy Marie?! It is the prequel to Commander in Briefs and is Coming June 20th!!

Have you ever wondered what Anniston was like before she became the Commander? How many times Theo walked away with blue balls after he and Ans hung out when they were just friends? 😜 What kind of things are you most excited or curious about?

Sign ups for Commanding the Pitcher are here–> https://forms.gle/APqS3BRb5NT1Qb3s5

“Out!” I give the two freshmen an apologetic smile as they gather their gear quickly and exit the batting cages like their asses were on fire. “You didn’t have to make them leave,” I argue with the idiot who is filling two pitching machines with quarters. He stops cold and whips around to face me. “Yes, I did.” He flashes me an ugly look that makes me want to throw a ball at his pretty face. “I don’t need any witnesses for what I’m about to say to you, McCallister.”

A self-proclaimed reader enthusiast, Kristy started her writing journey back in 2009, reading and writing when her daughter was napping. Establishing her place in Corporate America (because something had to pay the bills), writing became her dirty, late-night secret.

After eight long years, she released her debut novel, Commander in Briefs. It was a long road, but she can honestly say, the road less traveled had the most beautiful sights.

The only thing Kristy Marie loves as much as reading and writing is sports! Especially those that require muscles and a nice ass. Her favorite is, and always will be, baseball. She’s such a fan, that she even married her small town’s high school’s centerfielder where they still live with their three badass kids.