For a very limited time, ACHE by S.M. Soto is only 99 cents. It is a standalone, second chance romance novel. Grab your copy now!

What happens when you fall for the boy next door?

Bea Norwood had the market on normal.

A single-mother who doubled as her confidant and partner in crime? Check.

A neighbor and best friend she trusted more than anyone? Check.

But that was until the day her mother remarried. The day that changed everything.

When her best friend’s cousin, Liam Falcon, is sent to live with his aunt and uncle to clean up his act, Bea finds herself falling for the boy next door. With their hearts so infinitely entwined, Bea turns to Liam as her only escape from her new step-brother’s daily torment at home. Bea thought their love could conquer anything. But she was wrong. Love was for fools, and she was the biggest fool of them all. When Liam left Lakeport, he took her heart with him, shattering the organ to pieces.

Six years later, Liam takes a trip back to Lakeport to visit his family, and to see HER.

The girl who holds his heart.

The same girl who shattered it six years ago without looking back.

Liam is hell-bent on seeing Bea again after six years, but what he finds tears his heart in half. Bea Norwood is a shell of the girl he fell in love with. Underneath the baggy clothes, and pale skin, he knows she’s still in there somewhere, he just needs to find her.

Liam will stop at nothing to win his girl back, but sometimes, ignorance is bliss, and Liam isn’t prepared for Bea’s truth.

S.M. Soto was born and raised in Northern California where she currently resides with her son. Her love for reading began when she was a young girl, and has only continued to grow into adulthood. S.M. lives for reading books in the romance genre and writing novels with relatable characters. She refers to herself as a bit of a romance junkie. S.M. loves to connect with readers and eat copious of donuts that will surely lead to her demise (carbs are life). 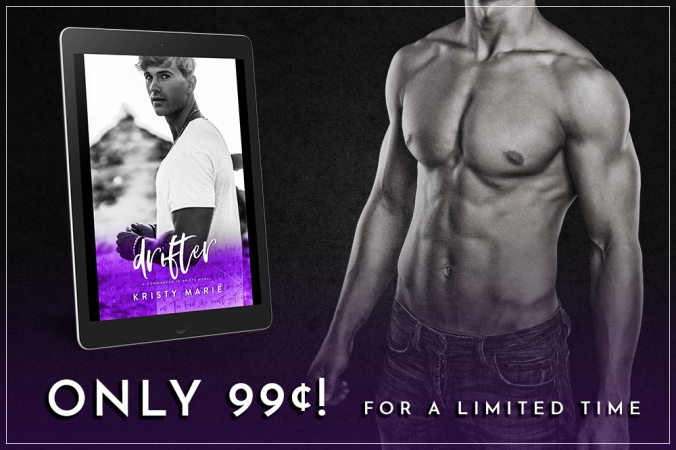 SALE!!! Drifter is on sale for 99 pennies or read free with KU!

Don’t buy if you hate:

✅ A Bad Boy with a Heart of Gold

✅ And One Hilarious Meet Cute

Grab Drifter while at this discounted price while you can!

Kristy Marie brings you a witty, sexy, and soul-searching story about finding love in the most unexpected places.

But in my line of work, a distraction will get you caught—or in my case, blackmailed.

But Connor Hayes isn’t just furious with me.

And hell-bent for payback.

He doesn’t just want my money, though.

He requires it all as repayment.

Right down to my empty soul.

Except when they are five-foot-seven and hotter than my exhaust pipe.

So, I blackmailed her.

It was either that or turn her in.

Bianca Morgan stole the only woman I’ve ever loved.

It’s only fair she replace her. 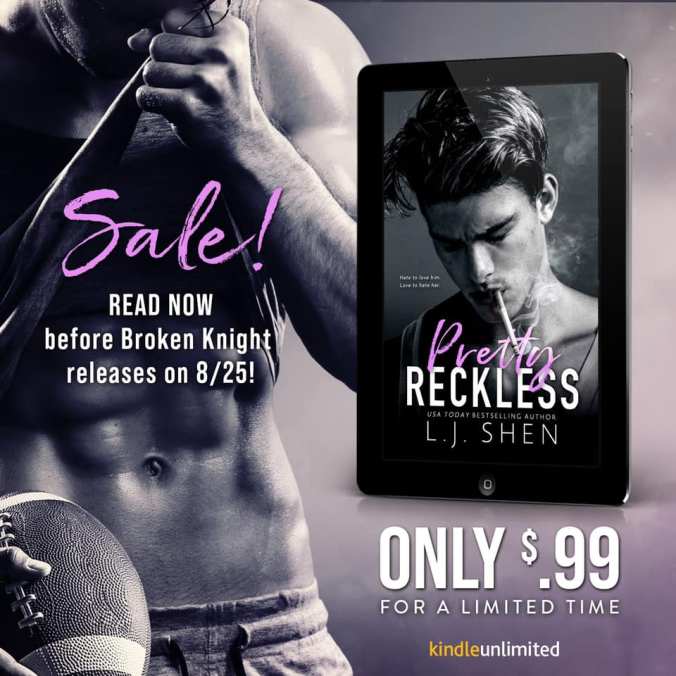 ▪️99c LIMITED TIME SALE▪️▪️
Pretty Reckless, by USA Today bestselling author, L.J. Shen is #ONSALE for a Limited Time Only! Do not miss this special sale!
.
“Easiest five stars given.” – Kat, Kitty Katz Book Blog
.
Download this Amazon Most Sold romance for only $.99 right now!
Amazon Worldwide: http://mybook.to/PrettyRecklessLJ
Audio: https://tinyurl.com/yy6nhy5s
Alternate Cover Paperback: mybook.to/PRAlternate
.
Synopsis:
We were supposed to be best friends
But turned out to be worst enemies…
.
Penn
.
They say revenge is a dish best served cold.
I’d had four years to stew on what Daria Followhill did to me, and now my heart is completely iced.
I took her first kiss.
She took the only thing I loved.
I was poor.
She was rich.
The good thing about circumstances? They can change. Fast.
Now, I’m her parents’ latest shiny project.
Her housemate. Her tormentor. The captain of the rival football team she hates so much.
Yeah, baby girl, say it—I’m your foster brother.
There’s a price to pay for ruining the only good thing in my life, and she’s about to shell out some serious tears.
Daria Followhill thinks she is THE queen. I’m about to prove to her that she’s nothing but a spoiled princess.
.
Daria
.
Everyone loves a good-old, unapologetic punk.
But being a bitch? Oh, you get slammed for every snarky comment, cynical eye roll, and foot you put in your adversaries’ way.
The thing about stiletto heels is that they make a hell of a dent when you walk all over the people who try to hurt you.
In Penn Scully’s case, I pierced his heart until he bled out, then left it in a trash can on a bright summer day.
Four years ago, he asked me to save all of my firsts for him.
Now he lives across the hall, and there’s nothing I want more than to be his last everything.
His parting words when he gave me his heart were that nothing in this world is free.
Now? Now he is making me pay.
.

The ultimate Alphahole bad boy is on sale for a limited time!

Vicious by L.J. Shen – is only $.99 or #Free in #KindleUnlimited
.
.
“If you love asshole heroes, you absolutely NEED to read this!!!” Jeanine Allison
.
.
Grab your copy today!
Amazon US: bit.ly/ViciousUS
Amazon UK: bit.ly/ViciousUK
Amazon CA: bit.ly/ViciousCA
Amazon AU: bit.ly/ViciousAU
Goodreads: bit.ly/ViciousGR
.
.
Synopsis:
Emilia
.
They say love and hate are the same feelings experienced under different circumstances, and it’s true.
The man who comes to me in my dreams also haunts me in my nightmares.
He is a brilliant lawyer.
A skilled criminal.
A beautiful liar.
A bully and a savior, a monster and a lover.
Ten years ago, he made me run away from the small town where we lived. Now, he came for me in New York, and he isn’t leaving until he takes me with him.
.
Vicious
.
She is a starving artist.
Pretty and evasive like cherry blossom.
Ten years ago, she barged into my life unannounced and turned everything upside down.
She paid the price.
Emilia LeBlanc is completely off-limits, my best friend’s ex-girlfriend. The woman who knows my darkest secret, and the daughter of the cheap Help we hired to take care of our estate.
That should deter me from chasing her, but it doesn’t.
So she hates me. Big fucking deal.
She better get used to me.
.
.
Leigh Shen #kindleunlimited #booksale #99pennies #oneclick

Welcome to the Dark Side is ON SALE now for a limited time only for 99 cents! Have you met DADDY ZEUS, Giana Darling’s most popular alpha biker yet?

WELCOME TO THE DARK SIDE is 99 cents and #free in #KU! Grab your copy today!

Dirty Headlines by L.J. Shen is on sale for the first time ever!
Grab your copy today for only $.99! **limited time only**

Synopsis:
I could have impressed him, if not for last month’s unforgettable one-night stand.
I left it with more than orgasms and a pleasant memory–namely, his wallet.
Now he’s staring me down like I’m the dirt under his Italian loafers, and I’m supposed to take it.
But the thing about being Judith “Jude” Humphry is I have nothing to lose.
Brooklyn girl.
Infamously quirky.
Heir to a stack of medical bills and a tattered couch.
When he looks at me from across the room, I see the glint in his eyes, and that makes us rivals.
He knows it.
So do I.
Every day in the newsroom is a battle.
Every night in his bed, war.
But it’s my heart at stake, and I fear I’ll be raising the white flag.